I watch and listen to a lot of TED talks while I work and have for a long time wanted to start reviewing them. Nothing seemed to be quite the right starting point in terms of topics, although though my fascination with 3D printers almost got me started. While I will eventually review TED talks on 3D printers, this self driving Google car technology felt like the sweet spot to start off. 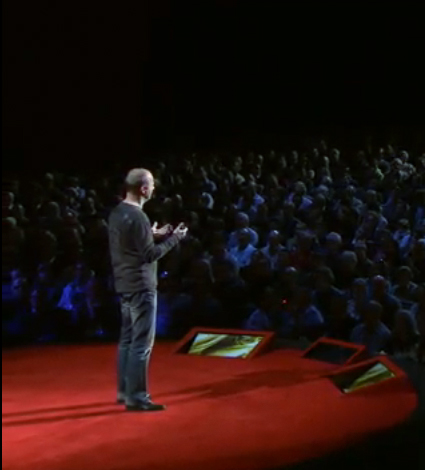 I have had a keen interest on the topic ever since I found out about the rumours on Google cars that drive themselves. It was good to hear Sebastian Thrun talk about the back story that led him to these cars, even though it was brief. I liked how he tied his personal story with how self driving cars started in the US. It was intriguing to know that such projects existed and were being funded. I wish there was a bit more back story given. I suspect I might have to dig up the original 2011 TED talk and live demonstration of the cars in action to get that detail.

The presentation was short and sweet. So short that it made me wonder if it was because they had to keep some of the information confidential. Either way, the presentation was still engaging in every second. This is largely to do with the fascination you get with the technology and being amazed that this is no longer science fiction.

As I have been exposed to this concept of self driving cars over a long period of time, I wasn’t entirely blown head over heals as I was the first time. Over time, I have been able to see not only the benefits this technology will bring but the threats as well. While we will get safer roads, a lot of people worldwide are going to lose their jobs because of the self driving cars. If you haven’t caught on to what I am talking about yet, I am referring to taxi or cab drivers and chauffeurs of course.

“While we will get safer roads, a lot of people worldwide are going to lose their jobs because of the self driving cars.”

Who will need to hire an actual person to drive a car with the self driving cars around. If you are a taxi owner, by getting this car you will be eliminating salaries, annual leaves and all the other complicated things that comes with employing a person. That means worldwide taxi drivers are going to be out of business fast, as this technology is a no-brainer. This of course is with the exception of the odd third world country, whose road conditions and archaic driving cultures, this technology might not be equipped to cope with.

My conclusion is that all taxi drivers and chauffeurs should start up skilling or looking for other careers they might want to pursue as a means of livelihood in the future. It’s only a matter of time now before these cars hit the market, and that would be how much time is left for taxi drivers to up skill.

When I was in South Korea, I met a man at the Samsung D’light store that sells real estate in Silicon Valley for a living. He told me he had been in one of the driverless cars and couldn’t believe how mind-blowingly accurate these things were as he sat in the passengers seat of one. He then said he was given a car to drive and told to chase one to catch up to it and couldn’t. Whether the story was true or not doesn’t concern me much, as I know it is not far fetched because of the VW I own that parallel parks itself better than I can with my 10 plus years of experience.

“…in some spots that I deemed too tight to park, the car parked itself perfectly.”

That isn’t to say I am terrible at parallel parking, however that in some spots that I deemed too tight to park, the car parked itself perfectly. It was also much closer to the curb than I was in most cases. I was also blown away by how much closer to other cars it got, when I thought it would surely scratch the other cars, it didn’t. What scares me is that this car is a 2011 model that has this self parking feature. Since then there has been 3-4 years to develop this technology further.

A brilliant TED talk all in all. Keep your eye on these Google cars.