I have always loved polaroid pictures and the fact that they are back with a vengeance is just a sweet deal. Using this camera is so much fun. Taking a photo and watching it instantly print it out is exciting. Then of course, like the Andre 3000 ‘Hey ya’ song all you want to do is “shake it, shake, shake it like a polaroid picture” which by the way you are actually not supposed to do.

The build quality of this camera is solid. The only thing I would have liked to be different is that rounded look it has. It’s a bit feminine and I am not sure if that was on purpose the target market they were going for as can be seen depicted on the cartridge boxes. That aside, it is a beautiful contraption that comes in many colours not including black. I chose the white one because it is the one that both me and my girlfriend could both use without me looking a bit funny.

“…unlike traditional polaroid cameras that included the battery in the cartridge.”

The quality of photos that it generates are pretty good. The photos that come out are the exact same dimensions as a credit card. I just wish they were bigger as they are a bit on the thin side which is not a bad thing either. The cartridges are easy enough to load and unload and the camera has a separate area for batteries, unlike traditional polaroid cameras that included the battery in the cartridge.

I love this product and there is very little about it to change. My major concern was the cost of refill cartridges as I bought the device at Costco at a sweet package deal with 4 cartridges at a total of AU$119.00. Everyone that asked me about that while I used the camera will be happy to know that you can get a pack of 10 for AU$20 on average. These were also readily available in many retailers like Officeworks, JB Hifi, Harvey Norman, Ted’s Camera and list goes on. This made the Fujifilm Instax Mini 8 a practical product to use on a regular basis.

“…all you want to do is ‘shake it, shake, shake it like a polaroid picture’ which by the way you are actually not supposed to do.”

The design of having a separate area for 2 AA batteries is a bit of a challenge. After some thought, I realised that older instant cameras had a battery included in each film pack to ensure that you never had a fully loaded cartridge but flat batteries to stop you taking photos. Fortunate enough we have so many gadgets and remotes that use AA batteries nowadays that you should be able to pull them out of one of those if ever in need.

Although the camera comes with handle, I found it quite challenging carrying this camera in a comfortable way. Maybe it was due to the awkward shape but this problem discouraged me from carrying it everywhere unless I had some sort of bag to toss it in.

I still found myself having to get used to picking my shots carefully. With a DSRL camera or smartphone I don’t have to budget the number of pictures I have to take depending on the amount of film I have left. This sounds like the reverse of the migration from film to digital.

I should also point out at this stage that everywhere I was saying polaroid I really should have been saying instant photos. Polaroid is the company that started this technology hence why their name is now synonymous with all products in instant photography. The Fujifilm Instax Mini 8 is a great little product that had me having fun will all people of all age groups when I used it. It was a stunning way to capture photos of my old colleagues as I left my old job and an even better social topic or ice breaker as we wasted many hours expounding on it’s history. This product is just made better.

Shot using the iPhone 6 Plus 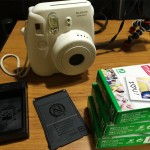