I don’t play a lot of mobile phone games as much as I used to when I first got a smartphone years back. However, when I saw Crossy Road I had to give a go. The sight of a chicken crossing busy roads and navigating floating logs in a river seemed amusing. It wasn’t until the chicken got hit by a car that it had me laughing. The effect was flawless.

As you can guess from the game, the whole concept of the game comes from the joke “why did the chicken cross the road.” The humour is carried into the game through funny little effects and that 8 bit look and feel. There isn’t much more to the storyline or concept. The whole point of the game is to reach the highest level you can – or should I say cross as many roads as you can.

“If you don’t wish to record yourself, sometimes when you die the game takes a screenshot…”

You are also able to record your hilarious game play from within the app. This is found in the apps settings. You can even choose to turn on the front facing camera of your device and record yourself as you play and react to this very funny game. All footage can be uploaded to the cross road website, which you can then email the link to that footage, or to YouTube after some basic editing.

If you don’t wish to record yourself, sometimes when you die the game takes a screenshot of that action. You can then choose to save that photo to your device for use later which is what did for our photo gallery.

I love the sound effects the chicken makes. They make the game so much more dramatic. That plus the sound of sirens and music and other traffic noises that try to break your concentration. It is genius.

Despite the whole world for the game being set in 8bit, Crossy Road is quite stunning and very pleasing in the way it combines colours throughout the game. You will quickly realise you can earn or use other characters to cross the road other than the very funny chicken.

I loved the fact that you could play this game either in landscape or in portrait mode. This meant I could flip my phone around for the best approach depending on how fast I wanted to go in the game. I am thankful that the game makers didn’t force one orientation on us and you could switch midway playing a game.

Each character in the game has it’s own special effect, as well as sound, that it does to distract you while you try to break your highest score. Some even have a hilarious way of dying like the baller and the zombie that surprising make you want to see them get hit by something so you can laugh. Some characters will actually cause the look and feel of the world to change when you use them. Some of these will make it easier or harder to actually play Crossy Road.

You are going to lose countless hours playing this freemium game. Whether by your self or with others, you will enjoy it none the same. It is funny and designed to be shareable via photos and video. Unlocking new characters in the game is probably the one thing that will keep you playing this game after you have given up on beating your highest score.

Don’t bother trying to compare with the leaderboard, as I discovered that Android users are able to hack the game and change the figures to their advantage. All in all, this simple game is just made better. 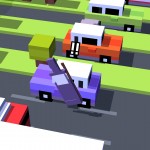